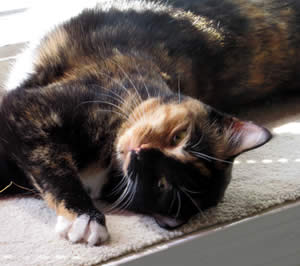 Normally, Crazy Lady is a laid back monarch, regally gliding about her domain. But, there are occasions when she transforms into entirely different people. A case in point was our recent acquisition by two cats who telepathically summoned us to the animal shelter.

The first inkling that Betty Willneverguess is up to something, is when she asks me a question that she knows that I know that she already knows the answer to. And, at the farthest edges of her eyes, there appears the most mischievous little twinkle. Questions like, “Would you adopt a kitten, or an older cat?” But enough about the questions. The next thing I know, we’re at the animal shelter ‘just looking’.

Now this may all seem innocent enough, but it’s all part of Her Excellency’s transformation from All Powerful Goddess to Maid Marian. You see, despite her clever pretense, she had already been on the internet for the previous two days perusing pussies, looking for animals worthy of becoming members of her royal court. Doing her very best to make me feel like my opinion mattered, ‘we’ were selected by two delightful creatures of feline persuasion, and within moments, debit card was in hand.

We were only going to adopt 1 cat, but after we found out that Miss. Prissy (age 3) (left) and Sir Shadow (age 5) (right) were from the same household, well, we did not have the heart to split them up.

I reckon that most folks would gather kitty supplies BEFORE getting a cat, but, it was not so in the land of ‘She Who Must Be Worshiped’. There were litter boxes, litter, food and water bowls, treats, catnip and lots of ‘ah, aren’t these just the cutest?’ to be purchased, and then of course there were ‘toys’. Soon, a 15 minute trip to the pound had become an entire afternoon of acquisition and preparation, all leading up to a two part harmony yowl filled ten minute ride home. It took us two trips from the van to haul all the booty in. 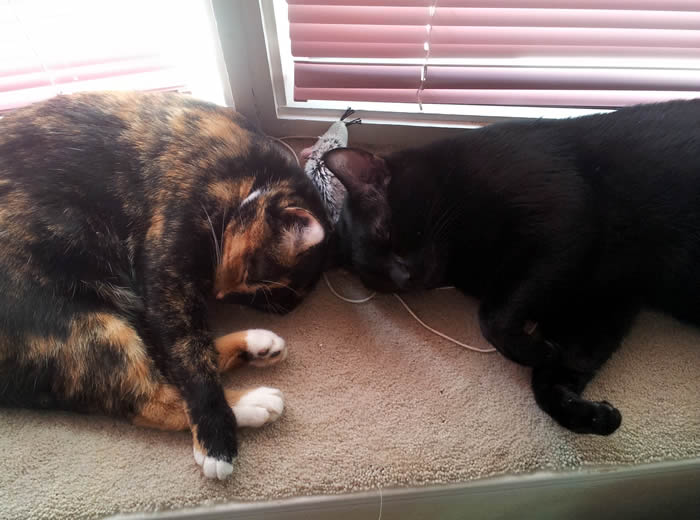 So glad that we adopted both cats to kept them together. They are best friends! 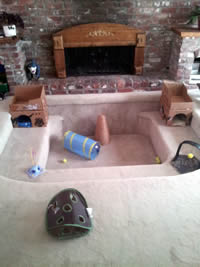 The Pit transformed into a cat playground!

Now responsible for the health of new subjects, Her Highness was not satisfied by the opinions of highly trained animal physicians, so Miss Screwrightoff proceeded to ‘research’ cat food herself. It is important to note that ‘research’ triggers yet another personality in Oya Keeptalking. Having already transformed from Goddess of All to a suitable companion for Robin Hood, suddenly before me is ‘Nerdus Extraodinaire’, Goddess of geeks. Three days folks! Three days and four nights this incredible vision of loveliness toiled hour upon hour over her laptop.

Crazed by contradictions, angered by advertising and perplexed by professionals, the Lady of Libraries narrowed her choices from thousands of dietary products down to two, then threw caution to the wind and made a purchase. All the royal subjects in my mind cheered wildly, our carnivorous companions appeared to be contented with her choice, and a royal degree was issued stating, “Forthwith and forevermore, let it be know far and wide that Empress of All, Goddess of Everything and Fairest of Them All, has hereby decreed that she hates choosing cat food, and all things related to choosing cat food.”

There are now sufficient stores to feed the furred flock of God’s personal adviser for months, and peace has once again returned to Madame Magnificent’s Pearson estate. However, the royal treasury was slightly depleted in the process, but Duchess of Doitorelse has the greatest confidence that I will take care of said matter ‘expeditiously’. 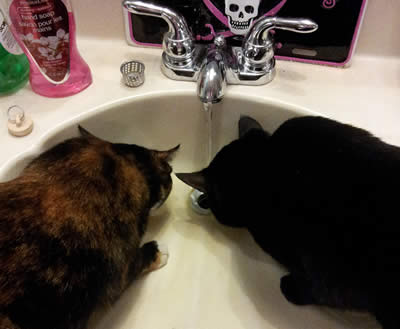 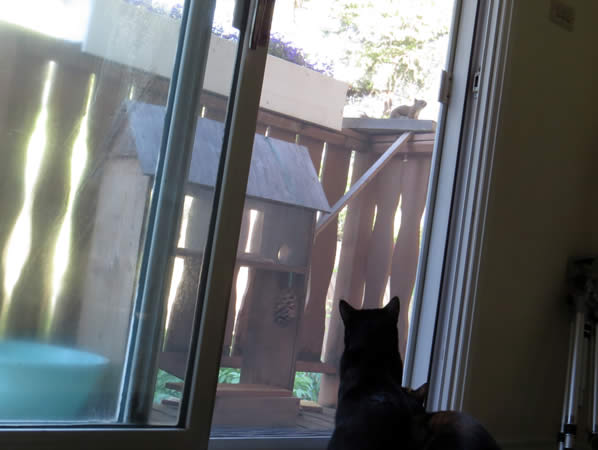 Pecker likes to torment the cats 🙂

I reckon that there are some folks that I really …