While it may sound like a war measure act of long ago, the laws that control the slaughter of horses, and selling the horse meat for humans to consume, don’t really exist. At one time, eating horses was fairly widespread in the United States, but it has been rare since the end of World War Two. The sale and human consumption of horses was never really illegal in the U.S., but in 2006, Congress cut off funding for all U.S. Department of Agriculture (U.S.D.A.) inspections of horse slaughterhouses, which effectively stopped the slaughter of horses, and the sale of their meat for human consumption (in the U.S., meat can’t be sold unless it is inspected). The last three U.S. horse slaughterhouses were shut down in 2007. 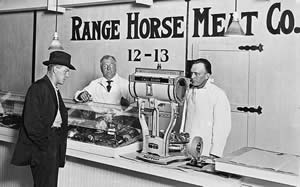 But, the efforts to stop the slaughter of horses for food didn’t necessarily end the practice, as over one hundred thousand horses are hauled to horse slaughter plants in both Canada and Mexico for human consumption, every single year. In fact, at the chic eatery, Pangaea, in Toronto, Ontario, the chef, Martin Kouprie, serves up a succulently delicious pan-seared equine tenderloin, served with Saskatoon berries, or, an excellent tartare (horse was the original French tartare, not beef).

But, in November of 2011, a bill was passed by the U.S. Congress, and then signed by President Barack Obama, that removed an amendment to continue the funding inspection ban, opening the gates for horse slaughtering plants to reopen in the U.S., and causing opponents to claim that it could cost $3-5 million a year to reinstate the inspections. So, if the next burger from a greasy spoon that you sink your teeth into in the U.S. has a little extra ‘kick’ to it, you now know why.

True or False? Hiccups are spasms in the diaphragm, the …

True or False? The first traffic laws were written by …