Every five years we have to renew our driver licences, and this year it was Crazy Lady’s turn. I had no idea that such a mundane event could be so much fun. It all began with her behaving oddly. Not being one to carefully apply make-up, do her hair, or pick out the perfect accessories to compliment her wardrobe, it took me by surprise when the Shelf Elf informed me that she was fixing to ‘get ready’ for the big event. The next thing that I knew, I saw her standing in the kitchen blow drying her hair, upside down! It’s important to note that Gwendolyn Gigglesmuch has naturally curly hair, and when dry, curly haired people can do some really awesome stuff with their hair. The more I watched her, the more I got an uneasy feeling that things were somehow sliding sideways quickly.

Hearing the hair dryer shut off, I glanced over the top of my monitor, and dang near gave myself a DYI vasectomy with my keyboard trying to back away from the freakish sight before me. If I hadn’t known better, I’d have thought her hair dryer had shorted out and shocked the begeezus out of her, leaving her looking like the Bride of Frankenstein. Smiling (to keep my lips firmly pressed together), I watched as she began putting on her outside clothes, while telepathically ‘daring’ me to say a word. Not a fan of celibacy, I didn’t. Her gentle ‘suggestion’ that I should also get ready, let me know I was to be a willing participant in the adventure(s) ahead.

Taking my usual fifteen seconds to get ready, I noticed that Miss Twig was making no effort to control an afro the size of a patio umbrella, which made her look a heap like a human dandelion. Before I could even use my outside voice, she said “What?” in a manner that suggested apocalyptic action upon an incorrect response. Positioning myself to protect the family jewels from possible vandalism, I dared to ask Mrs. Makezme if she was planning to go out like that. Surprising me with an ear-to-ear grin, she said that she certainly was, because if the government wanted her to venture from her domain, she was going to have fun doing it (pics on our blog). Other visits to government offices were fun like having teeth pulled, but I looked forward to going now.

When we stepped up to the counter, the lady looked at me like she was about to tell me that my poodle would have to wait outside. Once she realized that Foxy Roxy was there to renew her driver license, she began asking her questions. When the clerk finally got to, “Hair colour?” Curlylocks replied, “Brunette.” The clerk looked up at the mass obscuring the known universe, and said, “But, it’s blonde.” It turns out, that because my eternally twenty something spouse had her hair streaked to deal with a gray hair, she now legally became a blonde. At the end of the day, and after all of her careful preparation, her ‘sheepdog with serious static electricity issues’ hair style got cut off by the camera, foiling her attempt for a wacky driver’s license picture. But, as we walked down the office steps, I saw a twinkle come into Ima Craisy’s eyes, and I swear she looked a lot like she was thinking, “Hmmm … I wonder what colour they put down for bald people?” 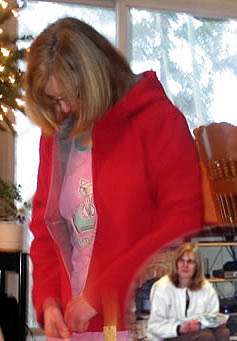 This is what Goddess Getswhatshewants’ hair usually looks like. Although she has natural curly hair, you can see that a flat iron is one of her best friends. 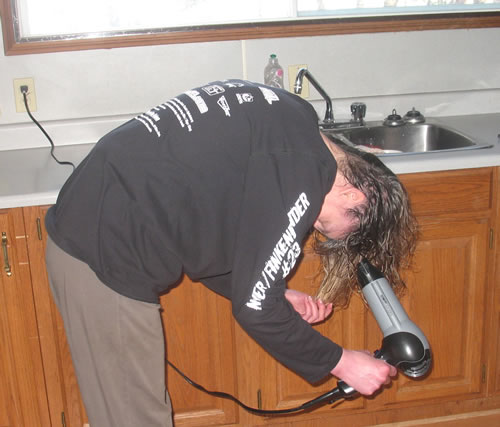 Without her knowledge, I snapped this photo of her blow-drying her hair upside down. When she saw the flash, she looked up and said, “OMG! Will’s Thoughts????” 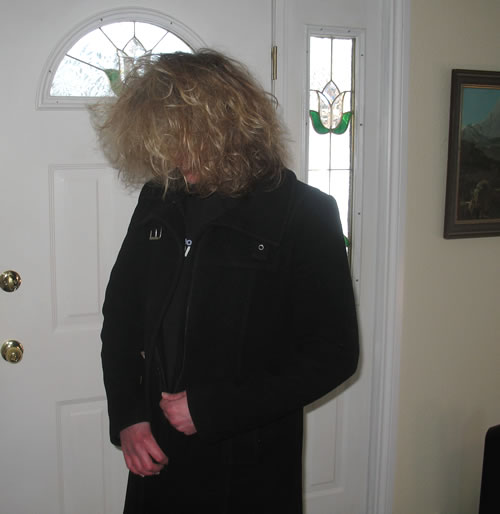 Crazy Lady putting on her coat for the big adventure. I was ‘informed’ that I was not allowed to use any of the full face photos, to prevent her picture from turning up on one of those “OMG! I can’t believe this person went out in public like that” sites! 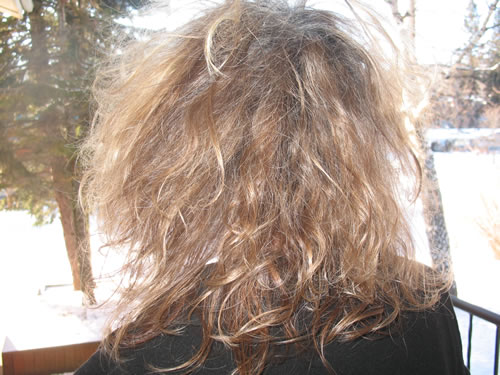 I walked into the government office with a brunette, and walked out with a blonde! Now that’s customer service! 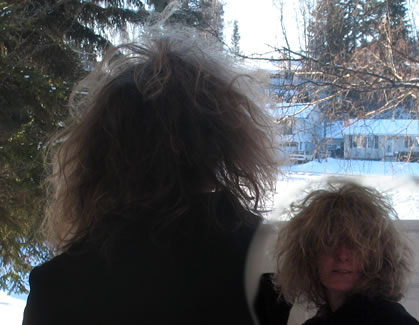 The human dandelion (back and front).”Frankie, Frankie, where art thou, oh Frankie?”