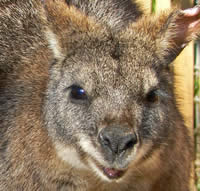 For centuries people have believed that crop circles were caused, or created by UFO’s, or that they were hoaxes actually made by man. While examining satellite photos recently, technicians spotted some graphical anomalies in areas of Tasmania, which revealed the origin of Tasmanian crop circles.

When they enlarged the photos several hundred times, they were shocked at what they saw! Using modern technology, the technicians were finally able to unmask the creators of crop circles in Tasmania. They were Wallabies! Yes, you read that right.

Tasmania, with more than five hundred poppy farms, is the world’s largest producer of legally grown opium used to supply pharmaceutical markets. Tasmania is also home to wallabies. It turns out that the wallabies were getting into the poppy fields, where they munched on the head of the plants, and promptly got higher than kites.

While enjoying their high, Tasmanian wallabies hopped around in circular patterns, squashing the poppies and creating crop circles in the fields. Research is now underway to determine if there’s a global trend of animals getting zonked out of their minds, who then stagger around high, creating geometric patterns.

Here’s a really stupid pet idea, dye their fur a …

Hank knows what to do with all the litter in …