Originating from Austria and Hungary, the Mangalitsa ‘sheep-pig’ is similar to the native Lincolnshire curly coat breed which died out in Britain 40 years ago. As part of a program to help save the animals from extinction, staff at Tropical Wings in Essex, U.K. are hoping that they can help the breed survive. “At first sight, people think they are sheep,” Denise Cox, education co-ordinator at Tropical Wings said, “It is not until they turn around and you see their faces and snouts you that realize that they are in fact pigs.”

The sheep-pig used to be a common sight in Lincolnshire and was shorn once a year to make sweaters, but it became extinct in Britain in 1972. In the early 1900s, many Lincolnshire curly coats were sold to Austria and Hungary where they were crossed with the Mangalitza, creating the Lincolista. Three years ago this cross-breed was found thriving in Austria and a small number were brought back to create a herd in Britain. Now offspring from this herd have gone to Essex to form part of a program to prevent the breed from disappearing.

Their woolly coats make them very hardy and help them to survive in the harsh winters in their native Austria and Hungary. In the summer it helps protect them from sunburn. They are worth about five times the value of an ordinary pig, and are fond of fruit and the odd tipple.

Here's the list of some of the weirdest beer to … 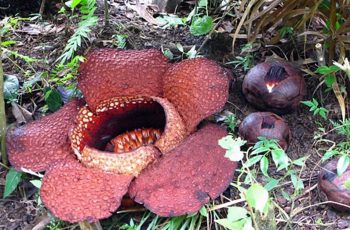 The Rafflesia arnoldii is the world’s largest individual flower and …