Jokes to make you laugh out loud, quotes to expand your mind, and questions you may not want the answers to:

» A woman has twins, but gives them up for adoption. One of them goes to a family in Egypt, and is named “Amal”. The other goes to a family in Spain, and is named “Juan”. Years later, Juan sends a picture of himself to his birth mother. Upon receiving the picture, she tells her husband that she wishes she also had a picture of Amal. Her husband responds, “They’re twins! If you’ve seen Juan, you’ve seen Amal.”

» “Some people, no matter how old they get, never lose their beauty… they merely move it from their faces into their hearts.” (Martin Buxbaum)

» A new father ran out of the delivery room and announced to the rest of the family, who were in the waiting room, “Guess what! We had identical twins!” The family was so excited. One of them immediately asked, “So, tell us, who do they look like?” The father paused, smiled, and said, “Each other.”

» The difference between capitalism and communism, is that under communism, man exploits man, whereas, under capitalism, it’s the other way around.

» A teenage boy seemed placid as the nurse approached his hospital bed to give him a psychiatric evaluation. His mother was seated nearby, immersed in her knitting. The nurse walked over and introduced herself to the boy. He looked right through her, and then started screaming, “I can’t see! I can’t see!” She had never witnessed such a dramatic example of hysterical blindness. Turning to his mother, she asked, “How long has this been going on?” Without looking up, his mother replied, “Ever since you stepped in front of his television set.”

» Teaching kids to count is fine, but, teaching them what counts is better.

» The British drive on the left side of the road because Roman chariot drivers needed to hold swords in their right hand. In North America, people began driving to the right when drivers held the reins in the right hand, because the wagon’s brakes were on the left. 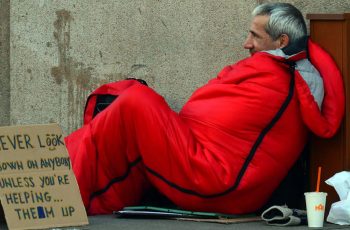 Religious students failed an exam for not helping a beggar. …