How many people are stuck on a mental or spiritual hamster wheel, going around in a never ending circle, without any real direction to go in, without a reward in sight?

Any pope that calls themselves Pious or Innocent must be delusional considering some of the things the Catholic Church has done over the centuries.

I have use for some things like a submarine has use for a windshield wiper…If a Satanist gets mad at someone do they tell them to go to Heaven?

When Jesus raised Lazarus from the dead why did the story apparently end there? What did Lazarus do for the remainder of his life?

There are three ways of dealing with a pile of verbal manure. It all depends on the sized of the pile. A small one needs just a shovel. Medium piles need a bobcat. Really big piles need a front end loader.

One thing I don’t understand is those who make God look like a manic-depressive. You know, pleasant one moment, out to get everyone the next day. I’m glad God isn’t that way in reality or I’d rather pray to either the spirit of Groucho Marx, Alfred E Neumann or Wile E Coyote.

When adopting a dog, the best one to get is the dog that picks you.

I have a problem with Greyhound bus lines. They cut back on the scheduled runs on Highway 3 in British Columbia and Alberta. It’s down to one bus in each direction four days a week, plus one can’t travel the entire Crowsnest Highway – Hwy. 3 – without changing buses at least twice between Vancouver and Medicine Hat. These decisions are made in Dallas, Texas.

At one time when a road went nowhere it used to be called a dead end. Now it goes by the fancy term of cul-de-sac. What is with these renaming things, is there any real good reason for it?…Another example on how hard the English language is to learn. An example is “I’m going to the store for four things.”

A few years ago Bruce Springsteen said he was more or less a common man. This is coming from a guy with a bank account the size of Rhode Island. Imagine living in a part of the world where a toilet is a privilege not a right taken for granted. Think outside the box more often. It’s a lot more adventurous and fun than staying in your box.

As much as prayer has its merits, when it does work thank the God you believe in but also give credit to the people who worked to make the prayer a reality…Instead of praying for a specific outcome, I find it more practical to be detached. Perhaps the Universal Spirit has something better in mind.

One thing people can learn is to have a mind of their own and be independent of negative mindsets they’ve picked up the habit of being in. Learning to be compassionate is part of the process…Metaphorically speaking I avoid the herd mentality for two reasons. I want to avoid stepping in all that manure and having it stick to me mentally. Then I don’t want the odour messing up my thinking abilities.

Considering how long most of us have waited in doctor waiting rooms, what would be like if doctors waited the same time for us?…How many of us choose routine and security over the unknown and the road less traveled?…The most important relationship you have is with yourself…When Madonna sings she sounds a lot like Minnie Mouse on helium.

A radio station I listen to says they have a no repeat work day where they don’t play the same song twice between 9 a.m. and 5 p.m. I wonder if they really do this or if anyone is checking up on it.

Judging by how many people say they’re getting screwed I wonder if the world needs a bigger supply of condoms or a giant one.

There is good reason that the English language is known … 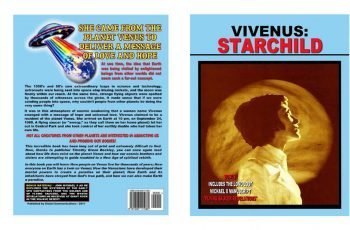 Vivenus Starchild A few years ago I wrote an article …