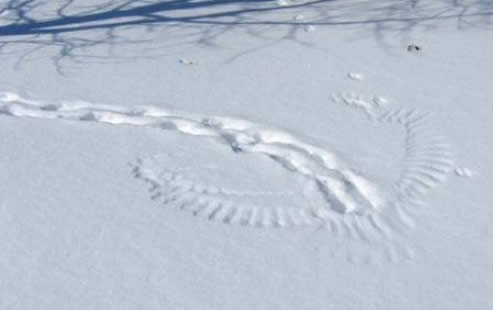 Humans have their legend of Santa Claus, but few know, or even care about the animal legend Santa Paws. For you who want to know, here is the story of a never seen critter, the phantom of the forests, the ninja of neighborhoods, the footprints by the food bowl, known as Santa Paws.

The legend begins in a cave far up a snow capped mountain. Found after a stone fell from the sky, raised by eagles and wolves, a beast never before seen in flora or fauna grew in wisdom and strength. It was part bird, part bear, part lion and part fish. And, the older it grew, the more it faded from view. As it eventually faded from sight, the eagles found it uncomfortable to fly with, because they had no idea where it was. When it ran with the wolves, all that could be seen was flying snow leaving tracks.

Once capable of feeding itself, one day it vanished, leaving behind a brace of rabbits as thanks. It found a new home in a far distant range, and for many years dwelt alone. It’s haunting call made other animals cringe, as it cried out for something, or someone in the still of the night. As the years went by, the cries happened less and less, until they too faded away, and a strange silence fell over the land. Then, on the darkest night of the year, a shadow passed over the moon as it silently flew forth.

The next morning, the animals of the forest awoke to gifts placed near the dens, nests, thickets and streams. The trout found branches crawling with delicious insects within reach caught on the rocks. The birds found wriggling worms, the eagles and fox found rabbits, the wolves found a deer, and so on. The bewildered animals called a meeting, but none knew who or what was responsible. But, whatever it was, its tracks led to every surprise, tracks the like of which none had ever seen. “We know it has paws,” growled a wolf, “but those are not wolf tracks, and I have never smelled that scent before.” One by one the animals admitted the creature was one that none there knew.

“What should we called it?” chirped a chickadee. “Well,” said the raccoon, “It has paws, so why not call it Paws?” “And it has a scent,” growled another wolf, “so why not call it ‘Scented Paws’?” A mighty murmur then took place as animals conferred with each other, and themselves, until they were silenced by a mighty whistle from a bull elk. A large horned owl flew to the center of the meadow, and said, “It is settled then. The creature shall forthwith be known as Scented Paws,” and left fresh droppings before flying away. One by one, the other dwellers of the forest came and left their ‘mark’, signifying their agreement.

As the years went by, the creature’s name slowly changed to ‘Santa Paws’, as the animals found it easier to say. And to this very day, on a dark December night, invisibly Santa Paws circles the world leaving something special for every critter there is. However, Santa Paws does not like humans, and can be a bit of a trickster, which has gotten more than a few pets in serious caw caw with their cohabitants. For instance, it is not uncommon for people to find their own gifts after a visit from Santa Paws, but gifts that humans do not want.

It might be a Christmas tree knocked over, a carefully placed pile of turds, pee on carpet or something chewed right to smithereens, but be assured that invisible patron saint of all furred, feathered and finned was there, and for whatever reason, decided you were worthy of its ire. Perhaps the cat ratted you out, the dog dropped a dime on you, or the parrot knows way more than it lets on. You’ll never know. So, the next time you find an unpleasant surprise at home around this time of year, before you yell at your pets give pause, because it wasn’t really them, it was Santa Paws.

Sure, pets are cute and cuddly, but not all the …

We were adopted by Sir Shadow (5), and Miss Priss …