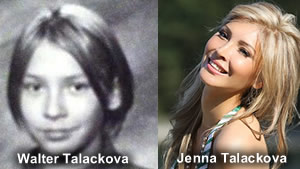 Jenna Talackova has won Miss Congenialty at the Miss Universe Canada pageant on Sunday, and has changed history around the world. Jenna became an international celebrity when she was disqualified from competing in March, due to not meeting the requirement of being a “natural born female”. After Jenna legally challenged the rule, it was changed, and now Jenna is one of four winners in the first ever four way tie for the Miss Congeniality title, the first person of B.C. First Nation ancestry to ever win it, the only transgendered person to ever compete in Miss Universe Canada, and the first transgendered person to ever win Miss Congeniality!

Brenda Mendoza, Miss Universe publicity director, says transgender contestants around the world are now welcome, in all of its pageants, after Talackova made pageant history by fighting to change the Miss Universe Canada rules to allow transgendered persons. Donald Trump has dubbed her, “Transgender Trailblazer”.

Talackova’s father is Czechoslovakian, and her mother a First Nation member of the Lake Babine Nation in the central interior of British Columbia, Canada. Jenna says that from a very young age she admired her uncle, Thomas Perry, because he taught her all about native medicine, spirituality, and gave her inner strength. Thomas successfully conquered multiple personal issues, and then became a medicine man, who healed people with herbs he harvested from the forest until his death.

I was always under the impression that I knew how …

By Art Bupkis Once upon a time, in a fair …