While shopping the other day, Crazy Lady came across Shrinky Dinks, and just had to take a picture of this interesting named toy.  After reading up about Shrinky Dinks though, I realized I must be living a sheltered life, because Shrinky Dinks have been around for quite some time!

Faced with a pack of bored Cub Scouts in 1973, a woman named Betty Morris was brainstorming activity ideas, and happened upon a craft book which mentioned that certain plastic container lids shrank when placed in an oven. The Scouts loved the concept, so they cut all shapes and sizes, and Shrinky Dinks were born! It allowed the boys to shove their Dinks into a heated oven for several minutes, where they would shrink to one-third of their original size, and nine times less than the original thickness. 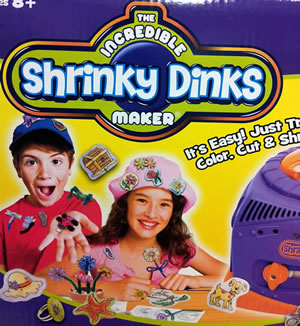 Now, the kids just pop their Dinks into the Maker on one side, then the oven does its magic, before cooling enough to safely touch. This popular innovation allows children to shrink their Dinks without supervising parents having to work an oven for the child.

The Incredible Shrinky Dinks Maker can be found at Kmart, Target, KB, FAO Schwarz and Toys’R’Us, in the $24.99 to $29.99 USD price range. It can also be found online at Amazon.com (sold in a bundle with a refill kit).

The next time you’re texting and pouring a cup of …