Hubby and I were invited out last weekend to a dress up kind of event. I started early in the week thinking about what to wear. Did I want to look good or be comfortable? You rarely can have both, so I opted for comfy. At my age I’ve lowered my expectations and standards significantly. Besides, the older I get the less I care about being noticed.

The event started at seven, so I commenced to ready myself at three. Four hours should be plenty of time to get presentable. As I showered I thanked my lucky stars that I wasn’t a movie star. Can you imagine the time and money you’d have to put in to look that good? Not to mention the pain and embarrassment you’d have to endure. The thought of a Brazilian wax made me weak in the knees and slightly queasy.

I knew I’d have to resurrect the pantyhose for the evening, a thought I dreaded. Of course I’d have to shave my legs first, because the nylon tends to accentuate hairy legs. It’s not a good look at any age. I opened the box of pantyhose and held them up for inspection. My heart sank. That four by two inch piece of gauzy material would have to stretch over this not so tiny frame without ripping, and I knew that would be dicey. Maybe if I stretched them out a bit first it would help. Grabbing the two ends I proceeded to yard those things out like I was exercising with Richard Simmons. Now they looked like they were made for a giraffe, long and gangly, but at least I knew they would fit my legs. I tried to stretch out the panty part. This proved to be a bit more difficult. I put my arms down the legs and pried the panty apart with my elbows. It put up a good fight and I was starting to sweat from the exertion. I rolled up one leg and proceeded to gingerly roll the nylon over my foot. Now for the other foot. I felt like a prisoner with shackles on as I carefully stood up and shuffled over to the bed.

I started to pull them up my legs and realized that, although they were long enough to fit chicken legs, to squeeze in German sausage was going to be a battle. Lying on my back on the bed, I pulled and stretched that material until it reached my waist. Unfortunately, the crotch on the pantyhose only reached my knees. I did more contortions than the entire Cirque de Soleil before I finagled myself into those Hanes. Bending over to slip on my skirt, I hear a sound that strikes fear in my soul. Ripppppppppppppp!!! I had snagged them on the bed frame and a nice long ladder tear raced up the back of my leg. Darn. Then it occurred to me, I don’t need pantyhose with a pair of slacks. Those creatures came off with a struggle but I felt free again!

I headed for the bathroom to put on the crack filler and war paint, and once again thought about those movie star ladies. Now I know why they get photographed coming out of limos with no underwear on. It’s certainly not to get attention… it’s because they can’t get into the pantyhose.

Ladies I hear you and feel your pain. Sigh… 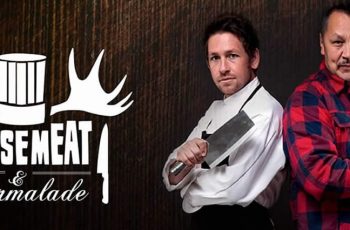 Moosemeat and Marmalade is a television series that’s every bit …

True or False? Golf is actually an ancient word, one …