It seems that election after election is seeing lower voter turnouts.

Are the people who are responsible for motivating people to exercise their right to vote failing miserably to do their jobs? All across north America, every election sees fewer and fewer people casting a ballot, and the trend shows no sign of slowing or declining. This has led to a lot of conversation about the best ways to get people to vote, which in turn, has led to a further decline in voter participation. 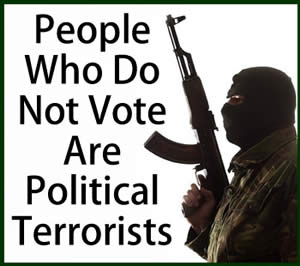 The officials responsible for motivating the public to exercise its civic duty have wasted hundreds of millions of dollars trying to get more people to vote, but instead of better turnouts, the opposite has happened. Why? It appears to be the direct result of them doing exactly the same things, in the exactly same way, over and over again expecting different results. This clearly defines their mindset, which, while enthusiastic, is certainly not accomplishing the job that they are paid a lot of money to do. 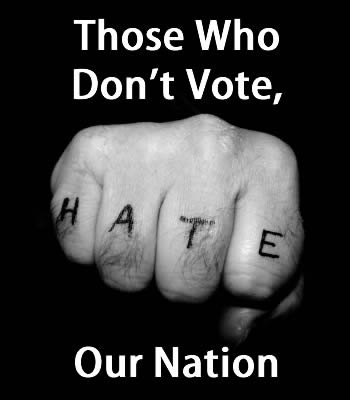 What is the solution to voter apathy? How does one get people to vote? First, it necessary to understand that getting people to volunteer is increasingly hard to do, so ‘encouraging’ voters to go vote is guaranteed to fail. Second, the guilt of betraying the sacrifice of our veterans is losing all its strength. As with volunteers, the public is clearly ignoring all pleas to the heart and patriotic duty. Third, trying to pursue the ‘youth vote’ is like closing the barn doors once the horses are all gone. The age of majority is not the time to educate children about voting.

To get people to vote, governments have a tool at their disposal called ‘propaganda’, and it is a powerful and highly effective force when used correctly. In order to increase voter turnout, propaganda needs to be used much better than the way it has been. Instead of appealing to people to go out and do their public duty, it is time to make ‘not voting’ an absolute insult to society, something so socially unacceptable that it is shunned and avoided at all costs.

Politicians have clearly proven that if you repeat something long enough people will believe it. It is therefore critical to start molding the minds of society at a very early age, teaching them that anyone who does not vote is despicable, untrustworthy and dangerous. It must be an integral part of educational curriculum at all ages, but, it must also be part of public education. That is done by using the various medias, and graphic imagery at bus and mass transit stops, in park washrooms, college classrooms, university laboratories, and from office lunchrooms to sport changing rooms.

Using a well thought out propaganda campaign is the only effective artillery that governments have left against apathy, and they need to act quickly to change public opinion. If they do not, they throw open the doors for the enemies of democracy to accomplish their goal of destroying the very foundation of freedom. If you agree that governments need to do a better job of encouraging people to vote, forward this article to your family, friends, and post the link on your social media. But, most importantly, share it with your local politician(s). Together, we can stop the erosion of democracy and keep our nation free!

Instead of rebuilding that old dock out at the cabin, …