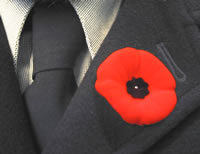 Harvey, an elderly Canadian, arrived at French immigration at the Charles de Gaulle airport in Paris. He fumbled for his passport. “Have you been to France before Monsieur?” the French official enquired in a snide tone. Harvey, smiled and admitted that yes, he had been to France before. “Well, in that case monsieur, you should have known enough to have your passport ready for inspection,” snipped the ill-tempered officer.

Harvey gently informed the man that the last time he came to France he did not have to show his passport. “Pas (not) possible, old man. Canadians always have to show passports on arrival in ‘la belle France.” Harvey gave the Frenchman a long, hard look and said, “I can assure you, you Parisian punk, that when I came ashore on D-Day in 1944, there sure as hell weren’t any Frenchman standing out on that beach asking for passports.”

The days of noble men and women, people with honor, …