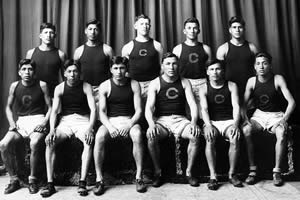 In 1912, Harold Anson Bruce, coach of the undefeated caucasian Lafayette College track team, had a team so good, that other schools refused to even compete against them. Desperate to find some competitors, and after hearing rumors that a coach, “Pop” Warner, at the Carlisle Indian School, had a contingent, Bruce invited the First Nation rivals to compete in an Alumni Day dual track-and-field meet. The Indian School accepted.

On May 25th, Bruce arrived with his forty-eight man undefeated squad, to welcome the visitors’ train. When Warner stepped off the train, it was with a very poorly equipped team of only five of his track squad. “Where are the rest of your Indians?” Bruce demanded. Warner replied, “I’ve got enough.” Bruce asked, “How many exactly?” Warner replied, “Five.” Bruce said, “But, Pop, I’ve got a team of forty eight elite athletes, and it’s an eleven-event program. This is a disaster. Your Indian boys simply don’t have a chance.” Warner looked him dead in the eye, and said, “Wanna bet?” 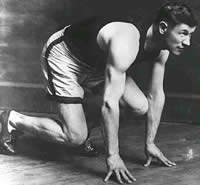 The meet was indeed a disaster – for Bruce. At the end of the day, Lafayette College’s unbeaten squad had been humiliated by a rag-tag group of “Indians” who had been forced into a residential school. One of the First Nation competitors won the pole vault, high jump, broad jump, shot put, discus, 120-yard high hurdles, and 220-yard low hurdles, but “slumped” to third place in the 100-yard sprint. His teammates contributed five more victories, and the Carlisle School Indians beat arguably the best athletes in the United States, at the time, 71 points to 41. Oh, the name of the athlete who won so many events? Jim Thorpe, often recognized as the greatest athlete in all of sporting history.

» Mr. Clemenceau posted a sign in the classroom stating, “Because …

Does the suspension of Phil Robertson from Duck Dynasty by …