An unnamed coal baron in China has paid $1.5 million for an 11 month old red Tibetan Mastiff named Hong Dong, setting a world record for the most expensive dog. Previously, a black Tibetan Mastiff, Yangtze River Number Two, sold for $563,00 to earn the title.

Hong Dong has been fed a diet of prime chicken and beef, enhanced with Chinese delicacies such as sea cucumber and abalone. Tibetan mastiffs are considered holy animals, blessing their owners with health and security, and are believed to have genetically diverged from the wolf 58,000 years ago.

The 11-month-old, 180 pound puppy, upon maturing, is expected to be used as a stud, making as much as $14,765 (CAD) every time. Kathryn Hay breeds Tibetan mastiffs in Tasmania, so she traveled to China to visit the exclusive mastiff kennels. Outside of China’s border, the dogs sell for $3,000 to $12,000. Inside the border, she’s seen puppies sold for as much as $870,000. “In China, it’s like the national symbol. Everybody knows the breed and its history,” she said. Even Genghis Khan, history’s most famous Mongol warrior and conqueror, is said to have kept them near his side.

Few images in life are more touching than rosy cheeked … 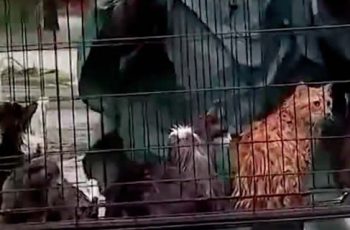