2017 Update: It seems that backers from the KickStarter campaign for the Combat Kitchenware, back in 2012, still have not received their product.
Shame on you James Brown!

Thank You Brad for bringing this to our attention! 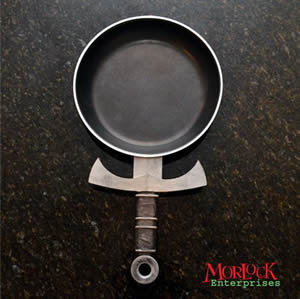 Noble knights would be royal jesters to equip the lady of the castles with Combat Kitchenware, frying pans with weapon handles.

The last thing that men need to do, is encourage lasses to use cooking appliances as behavioral modification devices. That said, because all men like to pretend that they’re a knight, and most are also excellent cooks, why not motivate them to slay the evil supper dragon by equipping them with the armored kitchenware of their dreams?

James Brown (no not THAT James Brown, silly!) aka Morlock, created a ‘Kickstarter’ crowd funded project, to produce Combat Kitchenware, a complete line of cookware with weapon handles, instead of just plain ones. The story of a dedicated geek and his band of geeky friends.

Back in 2005 Morlock decided that enough was enough, and he wanted to forge his own path in life. He looked about him, selected a few key items, packed them in a hobo bag and set off on his journey to the deepest darkest basement he could find. Fortunately he didn’t have to go very far. Deep in his cave, he puts together crazy props of his liking, or what other people have drooled for, er hoped for? at any rate…

Morlock Enterprises made its debut at Anime Boston in 2005. Since that time, Morlock has traveled far and wide spreading geeky goodness. His current endeavor is the Fighting Man’s Frying Pan, or FMFP.

Hubby and I have lived in the same house for …