What started out as a silly joke, turned into a massive advertising campaign for her store, and became the envy of fashion models worldwide. Liu Xianping, a grandfather from China, is the first elderly male model who reached internet stardom for modelling girls’ clothes. Liu posed for his granddaughter’s female fashion store on Tmall, and although the garments were designed for sweet and cute teen girls, featuring rosy shades, laces and ribbons, he totally pulled it off.

His confidence in front of the camera, his slim physique, and pair of long skinny legs, have gained the admiration of millions, and his granddaughter’s store sales have increased fivefold. In an interview with Chinese media, the granddaughter said, “He picked up one piece, and tried to give some advice on how to mix and match. We thought it was fun, so we started shooting.” Apparently, many of the combinations in the fashion photos are her grandfather’s ideas. He put on short skirts, long stockings and dresses, and even wore wigs to get that genuine teen girl look. 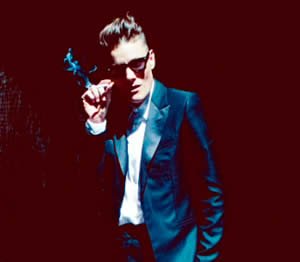 On the other end of the modelling spectrum, is 35 year old Casey Legler, a woman who exclusively models menswear. With her razor-sharp cheekbones, and her lanky 6 foot 2 inch frame, it’s easy to see why she’s recently been signed to the men’s division at the prestigious Ford modelling agency. French-born Casey says her unlikely carer as a male model started after posing as a guy in photo shoot, as a favor for a friend. “I am, in fact, buddies with a photographer who had this story, and knows what I look like, who said, ‘You’re perfect for this job. Are you in?’ I wasn’t doing anything on that particular Friday, and so I said yes!” she said in an interview with TIME Magazine. After her friend showed the resulting photos to a person that books models at Ford, she was soon signed to the men’s division by the prestigious agency.