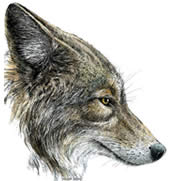 Canis latran predators, better known as coyotes, are appearing within urban settings all across North America, and in increasing numbers. This has a professor of wildlife ecology at the Ohio State University, Stan Gehrt, saying that urban coyotes, the largest of the mid-size carnivores, may be setting the stage for even larger carnivores to begin to migrate to cities. Gehrt said, “Coyotes are the ones kind of pushing the envelope right now, suggesting animals like bears, wolves and mountain lions may be next. Conflicts and challenges to co-exist used to be confined to rural areas, but not anymore. In the future, and I would say currently, it’s in the cities where we’re going to have the intersection between people and carnivores.” Gehrt theorizes that cities probably evolved because it was once safer for people to live together. “When people lived in a dispersed fashion, we were prey,” he said.

But, our freedom from predation also works to the advantage of wild animals, which are pushing into cities in huge numbers. Gehrt described Toronto’s raccoon population, for instance, as “humongous”, a description that Torontonians won’t argue with. While home and pet owners in cities have battled skunks and raccoons now for decades, coyotes have recently appeared in urban centres, far from the open range that they seem to prefer, and where they don’t have any predators.

Greater Chicago, with a population of nine million people, is home to at least 2,000 coyotes, said Gehrt, who has been studying the animals there for the past twelve years. “That’s the minimum, a really conservative estimate,” he said. He and colleagues even found a pack of coyotes living about eight kilometers from one of the world’s busiest airports, O’Hare International, where the animals live in the smallest coyote territory that’s ever been observed, less than half a kilometer in radius. The animals have lived there for years, so the environment must be meeting all of their needs. Gehrt said that scientists are now learning things about the coyotes that defies what they previously thought and believed about the animals.

Coyote sightings in Canadian cities and towns are increasing too. Toronto is now urging its residents to report coyote sightings. It is estimated that as many as 600 to 700 live in the city of Calgary. Dr. Emily Jenkins, a University of Saskatchewan professor working in veterinary microbiology and the school of public health, said that they’re also seen in Saskatoon. Recently, in New Waterford, Nova Scotia, wildlife officials killed four coyotes after a teenage girl was attacked by one. So, why are the larger carnivores now beginning to encroach on urban centres?

The reasons differ from species to species. The ranks of coyotes have swelled in recent years because fewer people hunt and trap the animals, and food, such as city rodents and garbage, is available. But, coyotes are territorial, and will only tolerate so many members in a pack. When a pack gets too large, young males are run off, and have to find new territory for themselves. Cities fill that need. The easy access to garbage is also a draw for even larger carnivores though, such as bears. And, cities provide excellent opportunities for stealth, and to pounce from above, so the plentiful supply of coyotes, raccoons and domestic pets, may draw big cats, like mountain lions (cougars).

But, with new animals, comes new health challenges for humans, such as a dangerous tapeworm in urban coyotes, Echinococcus multilocularis, that if spread to cities, can infect dogs and humans. Urban design may also be causing closer contact with people, because ravines, green belts and valleys act as virtual highways for animals trying to find a way through areas shattered by urban sprawl. It is not uncommon to hear about bears, cougars and moose coming through towns today, because urban designs sort of naturally funnel them into cities. Regardless of whether we’re in the animal’s territory, or they’re in ours, soon we’re either going to co-exist, or fight as we traditionally have, with bullets, traps and poison. Municipal planners must now consider future wildlife encroachment, and really need to consult with wildlife ecologists.

It’s bad enough that our kids are hooked on video …