“To see what is in front of one’s nose needs a constant struggle.” – George Orwell

After being on Planet Earth for 58 years I’ve come to the conclusion that 80% of what I read, listen or see is pure B.S., 15% I just go ‘grunt’ over not caring one way or another how it goes. Only the remaining 5% is anything worth dealing with. I’m in the habit of reading non-fiction – or what passes for it – but even that probably has a good whack of B.S. added on to it. With so much in the way of issues, dramas and agendas that pass between people I really don’t have the patience to deal with the levels of B.S. involved especially with the politically correct special interest groups and their policies.

It’s amazing how much B.S. is accepted in our world.Spin Doctors, statistics, campaign promises, public relations, media are at the top of the list but dozens more could be added on here. But the bottom line is that B.S. is still B.S. no matter how fancy the wrapping looks. Just when one thinks the truth can’t be tinkered with much more.

One needs a highly developed sense of baloney detection to deal with all the nonsense going on in the world we inhabit. It doesn’t say much when one assumes all what is being said is B.S. As a result even the most skeptical of us will become cynics. Just to clarify I regard skeptics who ask good pointed questions to get honest answers, cynics see value in nothing. Before anyone accuses the ‘upper crust’ of society being the best B.S.ers any individual better take a look at how good at B.S.ing they are.

There are different levels of B.S. One is the adding on of information that alters a story completely. A question to ask here is if the information presented is as reported or how much of it has been changed? Second is the taking away of information under the guise of a little white lie never hurt anyone. Of course it does as it erodes trust between people. A third level is information overload that gets too much for a person to handle, causing them to burn out while dealing with it. Another level is information that either is downplayed or separated to keep people in a state of confusion. With these categories in mind it’s no wonder people get jaded and turn things out.

To avoid rising B.S. levels one just has to admit they don’t know everything. The expression ‘I don’t know’ goes a lot further than barfing out questionable material dictated by the handlers pulling the strings of their minions who are limited on what they can say in a public forum. I do wonder how their conscience is handling the situation.

Conspiracy theories aren’t a factor here; it’s connecting the dots to expose what is being swept under the rug and into the light of day. B.S. is like a heavy yoke placed around a person’s neck and shoulders. Illusions need to be looked at in the cold white light of dawn to see what they actually are. While absolute power does corrupt absolutely, it’s much truer that the lack of power corrupts more so as a person without any power doesn’t have the accountability to back up their claims.

Are people so full of fear that they readily accept being over regulated by the combined forces of government, corporations, media and organized religion? It’s all in the name of steering the entire human race into the same thinking patterns. Then some wonder why most of us haven’t learned how to think. This isn’t done by accident but by deliberate action to keep us from really connecting with ourselves and each other.

Why is learning how to think not encouraged along with developing a sense of wonder? I can answer this on two fronts. One is that it would erode the power base of the authorities. Secondly most of us don’t or won’t accept responsibility for our doings. Fear of the unknown is a big factor here. Most humans have been trained very well to be sheeple. Limited thinking is another form of B.S. that people are involved with. Language has been manipulated so much over the years that one really has to listen to what is being said. Maybe it’s all in the name of maintaining the current or an upcoming status quo.

All of the above is being done slowly over time so it is firmly in place before people realize what is going on.It’s time to raise from our slumber and see the B.S. for what it it. Then it’s a matter of motivating people to clear out the B.S. from their own life before doing something about the world wide B.S. It will be amazing to find out exactly what the truth is. But then we, as a species, have been screwed around for so long now that we have accepted B.S. as the truth. It is time to live by the spirit of the law, not get bogged down by the letter of it.

To say B.S. is an exclusive domain of the bigwigs is also B.S. Everyone down to the lower rungs of society can B.S. pretty good themselves too.

The novels 1984, Brave New World and A Handmaids tale weren’t meant to be how to books but as a warning to where we might be heading if we don’t take stock of the situation we are currently in.

The bottom line here is that all the B.S. needs to be flushed down the toilet. It doesn’t need to be a prat of our lifestyle by any stretch of the imagination. 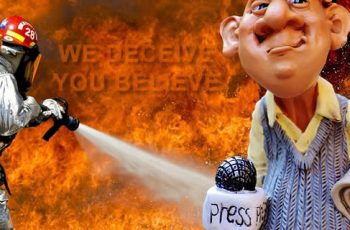 One believes things because one has been conditioned to believe …

Psst, anyone want to know a secret? Of course they …