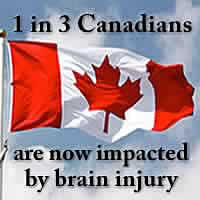 Canada has long been touted as ‘a democracy with a social conscience’. And, a massive social conscience it has. Every year billions is spent by governments on serious medical and life challenges, but for some strange reason, they have turned a blind eye to the number one cause of death and disability worldwide, brain injury.

Perhaps it’s the Canadian love for recklessness, danger and thrills, or maybe it is due to a lack of knowledge, but four hundred and fifty six people suffer a brain injury every single day, meaning one person incurs a traumatic brain injury every three minutes. Brain injury never happens just to individuals. Brain injury happens to families, friends and communities, and it is now impacting the lives of one in three Canadians.

Acquired brain injury is the leading cause of death and disability for Canadians under the age of forty. In fact, thirty percent of all brain injuries in Canada are suffered by children and youth, with brain injury being the leading cause of death and disability among children. Fifty thousand Canadians sustain brain injuries annually, with incidence rates rising year after year. Of the fifty thousand, over six thousand Canadians become permanently disabled, and more than eleven thousand will die.

Brain injury is an enormous burden on the health care system, with each severe brain injury costing the Canadian medical system over four hundred thousand dollars at the time of injury. Costs then remain approximately the same each year following the incident, making the economic burden of acquired brain injuries greater than twelve point two billion dollars per year.

But the real costs far exceed those numbers because they do not take into account all those who lose the ability to work, and their homes, families and friends. A 2009-10 study of Toronto’s homeless population, found that seventy percent of those surveyed acquired their brain injury before becoming homeless.

Brain injury is a silent and invisible epidemic in Canada, but governments continue to turn a blind eye to it. In all fairness, they do occasionally toss tiny sums at it (used to build websites that few ever visit and posters seldom downloaded), but their lack of any serious funding for brain injury associations and organizations to prevent the injuries, and help the injured with their life challenges, allows the issue to increase at a very alarming rate.

Brain injury in Canada has now become so critical, that if governments do not act immediately by funding brain injury education, prevention and support, within a few short years the problem will be so large that the entire nation will begin to lose its ability to remain competitive in the global market.

Here is a collection of things to make you laugh, …