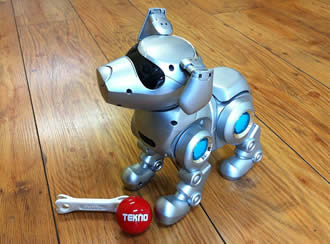 Pet ownership is hard. First you have to pick the animal, then take it home, train it, feed it when it’s hungry, take it to the vets when it gets sick, pet its needy little face all the time, walk it and eventually bury it in a moment of great emotional toil.

Is this really how it has to be? In the future, why can’t our pets be robotic? Self-maintaining, autonomous, with no stomach to fill with expensive kibble or fleshy organs that are susceptible to disease. Think of the money and emotional hardship that could be saved?

Here then, are 3 amazing robotic pets pushing pet ownership into a new age.

1. Pleo – Let’s get one thing straight right off the bat. Pleo is an autonomous pet dinosaur. Want one? Of course you do! But wait, there’s more. For a modest price tag you can get a robot which can recognise voice commands, has its own born-in character which affects its moods, needs and biological clock, so it knows when it wants to eat, sleep and explore. It’s impressive tech for a low cost. Oh and it looks awesome!

2. Jessiko Robot Fish – Sure, you want a pet, but nothing high-maintenance, even if it is a robot. The Jessiko robot fish is the neo-pesche of the future. It acts like a real fish, it doesn’t need feeding and it looks as futuristic and cool as you’d want a cyber-fish to be. As much a talking point as a pet, you can pick one up on the company website.

3. Big Dog – OK, so far we’ve had a dinosaur (amazing!) and a fish. But I know what you’re thinking; ‘This is all well and good, but where’s my lovable puppy dog for the 21st century digital age?’ That’s fair enough, they are a man’s best friend after all.

Here we have it then, the Big Dog. If you’ve ever wanted a dog with no head, massive, terrifying legs and the ability to crush your skull with a cinderblock, this is the robo-pet for you. Currently the Big Dog isn’t commercially available but in the future I can see a pack of these things roaming the neighbourhood, smashing up cars, comically stumbling about and causing general, amazing havoc. Good dog indeed.

That stuck up, organic moggy doesn’t seem so appealing now, does it? Which of these 3 would you pick for your home? Does a robotic pet sound like a good idea to you, or do you prefer your animals to have a little more soul and a little less solder? Let me know in the comments below.

Grant Bailey is a writer for Petmeds and owner of 2 fluffy, organic cats. Though he loves them, a cool sci-fi robot kitty certainly sounds like a tempting offer.